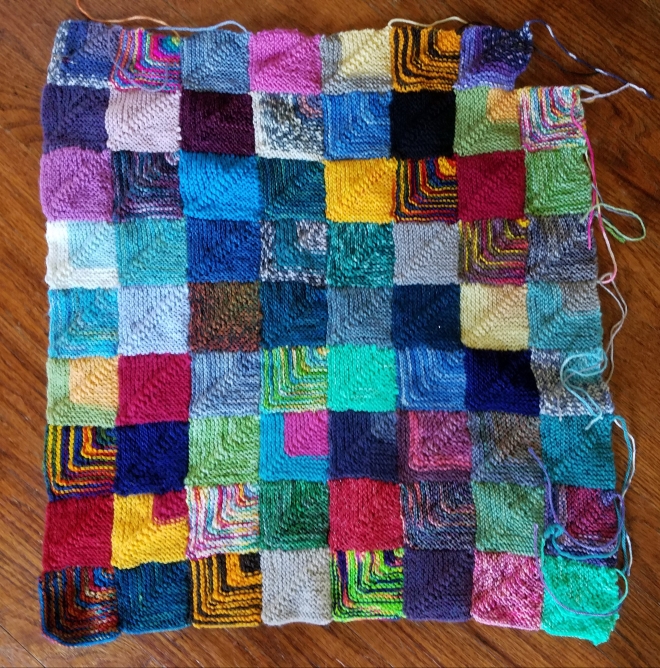 The blanket is starting to look more like a real blanket. I still have a long way to go (about three years). It’s only about 16 inches square (I need to remember to include something for scale in the photos).

I highly recommend knitting a square a day and slowly making your own blanket. It’s a bit of knitting meditation that helps me through the day.

I was supposed to be in North-West Iowa this weekend for a family reunion. The kids and I were all set for a weekend of swimming in the hotel pool and playing with cousins on the farm. We hit the road this morning and picked up Aunt Kathy to ride with us. We were about 45 minutes outside of Des Moines when our plans changed. Audrey asked what was wrong with her mouth and then threw up all over herself.

We turned around. She seems fine, but I don’t know for sure. I didn’t want to be stuck in the hotel with a sick kid or kids. I also didn’t want to get my cousins’ kids sick.

So now I’m at home all weekend and I’m kind of having a pity party for myself because I’m going to miss out on all of the fun.

Yup, I will turn this mood around. But first I’m going to have a pity party for about 20 more minutes.

Are you a baker? Have you noticed how expensive vanilla extract has gotten? The vanilla crop in Madagascar failed causing a shortage of vanilla beans. The price of vanilla is now ten times what it was a few years ago.

I recently ran out of vanilla and picked some up at my local spice shop. An ingredient that I never considered the cost of now makes me gasp. I used over half of this bottle in two batches of cookies this morning. 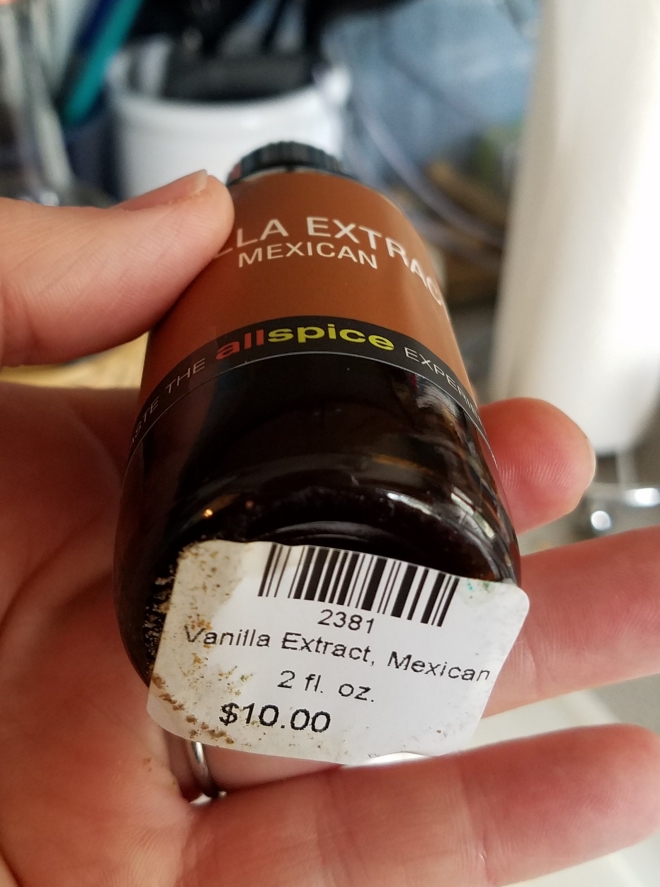 I am not going to switch to intimation vanilla extract. You can tell the difference in the final product. I was planning to buy the now $40 bottle of vanilla the next time I’m at Costco. It is a large bottle and should get me through a year of baking. I may still buy a bottle, but it is no longer immediately needed.

I remembered I had vanilla beans from Costco that I bought last fall. I also have vodka. Those two items are all you need to make your own vanilla extract. 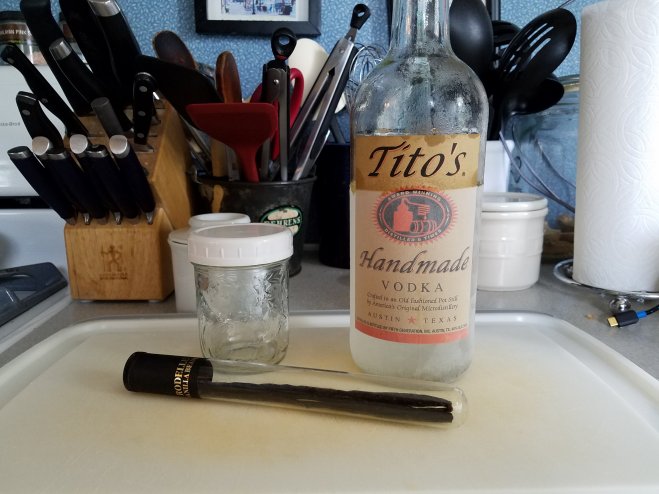 It couldn’t be easier. Slice some vanilla beans open (I also cut them in half so they would fit in a jelly jar). Put the open beans in a jar. 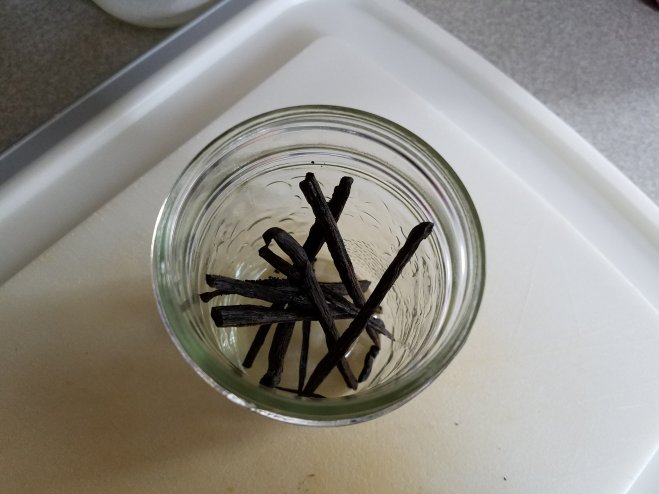 Cover the beans with vodka. 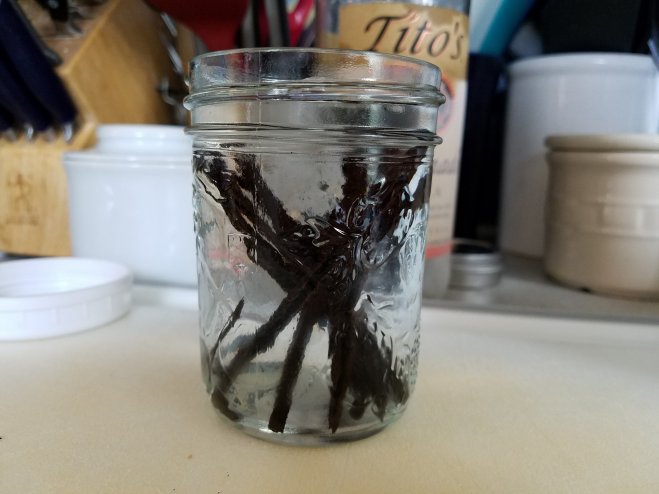 Put a lid on the jar. Put it in your cupboard. Shake it a couple of times a day for two weeks. after that it should be ready to use. I’ll add vodka a few times, as there will be enough vanilla to infuse two or three times the amount of vodka in the jar.

After a few hours you can already see the change in the vodka. 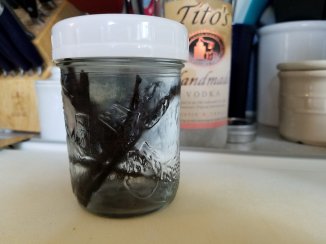 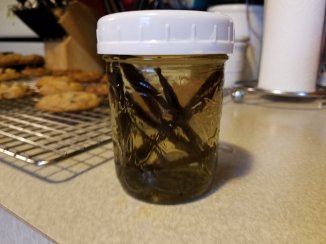 Hopefully the vanilla crop recovers soon. Until then, I hope you find some forgotten vanilla beans in a drawer and vodka in your freezer and make some of your own extract. 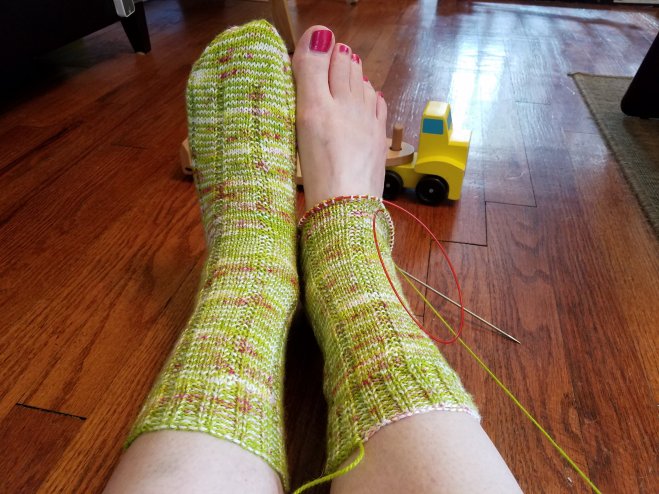 I’m finally making progress on my socks. I’m three rows from finishing the gusset. I feel like after you finish the gusset of a sock the rest of it flies, so I’m hoping I’ll be done with these by next week.

I am heading out-of-town this weekend, so I might not get much knitting done. I am the driver, which means I’ll be missing out on car knitting. It’s a shame, because I’ll be in the car for over 8 hours. If I was able to knit and drive I would finish these socks easily.

I hope you are making good progress on your projects.

I love to cook, but I hate turning on my oven in the summer. I find myself cooking in the crock pot because it doesn’t heat up the whole house. Last night I decided to try something new in the crock pot – eggs. 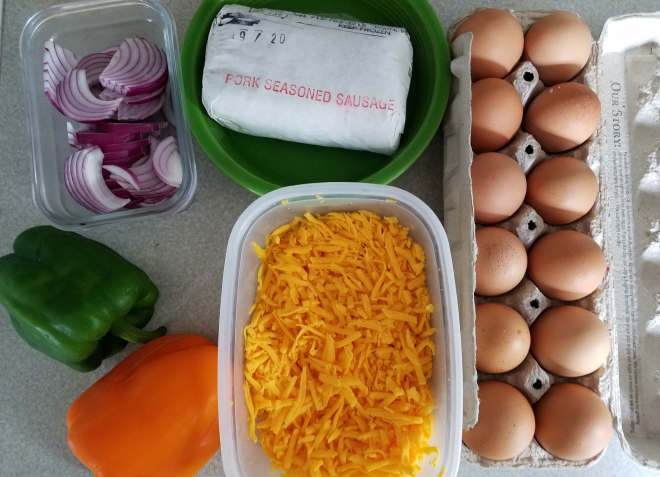 I browned half of a pound of breakfast sausage in a skillet and transferred it to my crockpot (which I sprayed with oil). I then used the same skillet, with a bit of vegetable oil (I wasn’t planning on needing that, but the sausage was very lean), to saute a green pepper, orange pepper, and half of a red onion.

Once that was soft I added it to the crock pot. I cracked a dozen eggs into a bowl and whisked them until they were mostly scrambled. I added salt, pepper, and a cup of shredded cheese. I then poured the eggs over the meat and vegetables and cooked it on low for about 2 hours. Once a knife stuck in the middle came out clean I cut it into 8 wedges and called it dinner. 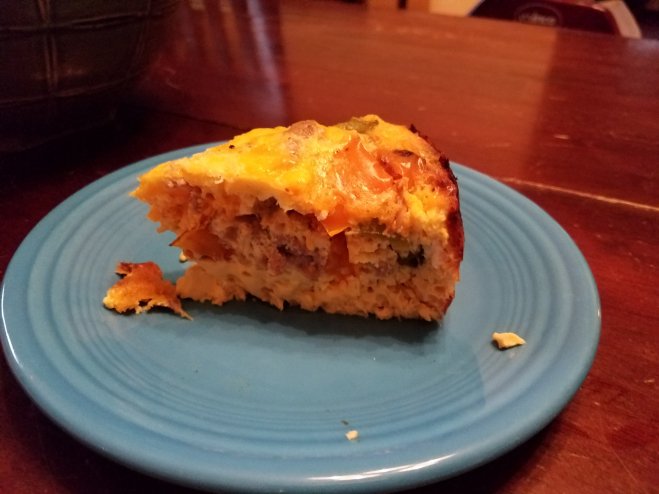 We both like this, so I’ll be making it again. I will be making a few changes. I’ll probably use soy chorizo instead of breakfast sausage. I used pork sausage from our egg lady. She has great eggs, but her sausage is pretty bland. I will probably make this without cheese next time, as it isn’t needed. I think a pinch of good cheese on top would be better than supermarket cheddar mixed in.

One of my favorite things about eggs for dinner is the leftovers the next day. I had this for breakfast covered in siracha. The kids had it for breakfast and ate it once it was called eggy pie. I microwaved slices for a minute. They reheated well and didn’t seem to dry out.

What do you cook when you don’t want to turn the oven on?

I’ve made a lot of progress on the scrap yarn shawl knock off this week. It is flying off the needles. I only have two colors to go. If I put my mind to it I could finish it this week. 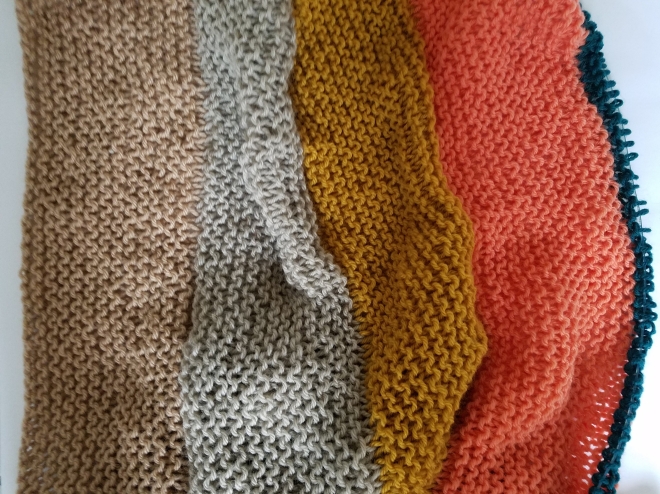 It was supposed to go from gray to pink to turmeric. I read my notes wrong and switched the colors. Mary-Claire said she didn’t mind the colors this way, so I am not tearing it back.

I love how this is turning out. It is so cozy, and I can see how it will add a nice bit of color to a dark wardrobe. I’m using a little over one skein per color. I’m considering making myself a wrap with the leftover yarn. I think I have some Wool of the Andes in my stash that would work with these colors. If I go with seven or eight colors instead of six I will have enough yarn without having to buy any.

Do you ever get so excited about a project you think you should make two?