How on earth is it the end of July? Please explain to me how this month could go by so fast. If you are unable to do that, feel free to tell me that I’m just very confused and it’s only July 12. I would also accept that. I just don’t want this summer to end.

When I look at my blanket this month compared to last month I can see that 31 days have past. Without the proof of blanket squares I would never believe it.

Another thing I can’t believe is how big Elliot is getting. He got his haircut today and now I’m weepy over how he doesn’t look like a baby anymore. 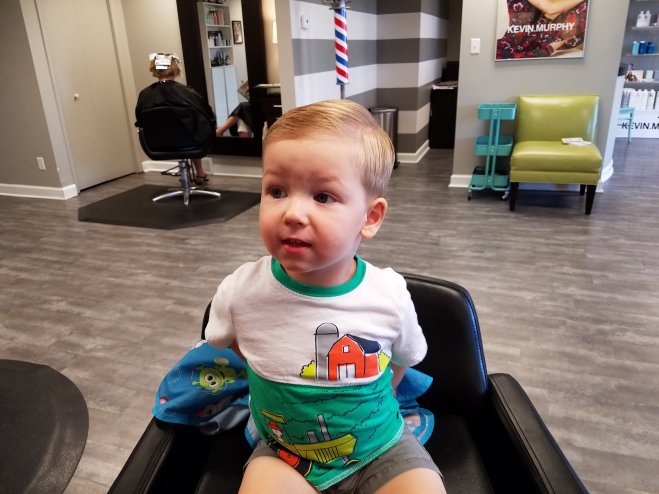 So now, if you’ll excuse me, I’m off to pout about how fast summer and childhood go by.

Audrey and I went camping last weekend. It was the kind of camping I prefer – the kind in a camper with beds and a flush toilet and air conditioning.

We camp with our friends at their camper in North East Missouri. It is a four-hour drive according to google. According to a certain 3-year-old it takes 5 and a half hours. We stopped four times on the way down. But sometimes you need to stop and take a hike through a butterfly garden or play at a park. Hike is probably not the right word, as it is more of a flutter. Audrey is very interested in fluttering like a butterfly, so she runs around flapping her arms, saying “flutter, flutter, flutter.” 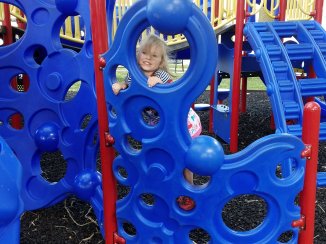 When we got to the camper we unpacked our stuff and headed out to do our traditional first night of camping dinner: pizza.

On Saturday it was a little chilly for July. It was too cold for the water park or the beach, so we explored playgrounds. We visited 3 before nap time. It is the first time I can remember Audrey falling right to sleep in the camper. 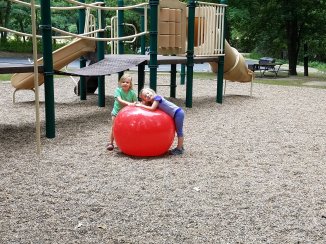 For dinner we decided to head to the Hootenanny – a restaurant that specializes in pie. I had a wrap for dinner that was delicious, but the pie was what stood out. I went with a slice of butterfinger pie. 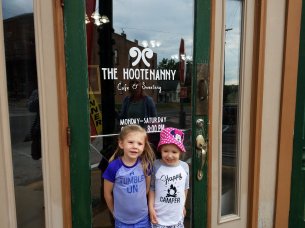 After dinner we headed to another park. We then headed back to the camper, totally exhausted.

Our drive home was faster than our drive down to Missouri. By that point Audrey had figured out that she wasn’t going to get a bag of M&Ms every time we stopped. We had been on the road for about three hours when we got to Oskaloosa. When we are on a road trip and it is clear that the kids need to get out and play I just drive around a small town off the highway until we find a park. They are usually easy to find. In Oskaloosa I found the best road trip park we have ever found. It was huge! There was a new playground, and old wooden playground, and an old playground with a rocket slide. It was so big I might be heading there next year for a special picnic day. 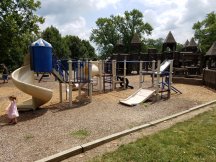 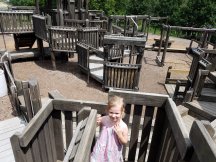 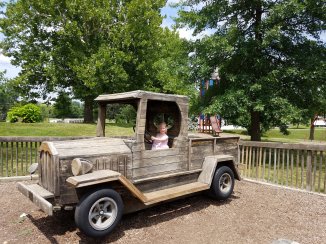 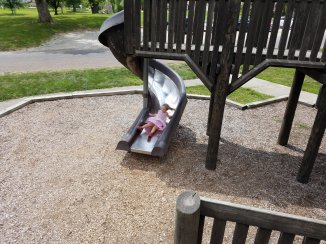 This week we are staying in Des Moines, which I’m looking forward to. I love to travel, but four nights out-of-town last week wore me out.

I hope you had a fun weekend too.

I was in Cedar Falls visiting my parents this week. It was three days filled with parks, playing outside, and a visit to the library. We also had ice cream for lunch two days in a row.

I had never let the kids eat anything other than a healthy (ish) lunch before. Their minds were blown. My mind was blown on Wednesday when I saw how bad Elliot was at eating ice cream. At one point he thought the ice cream was too cold so he started eating the bottom of the cone. It made a huge mess.

Luckily he appears to be a fast learner when it comes to ice cream. He was much cleaner today.

Now it’s back to normal for Elliot. I wonder how many lunches it will take before he eats vegetables willingly again.

Happy Wednesday! I am happy to share my Wednesday progress this week. It has been a busy week, just not so much on the knitting front.

My sweater is moving along slowly. It continues to slip off the needles, but that is giving me great practice at picking up fallen stitches. I absolutely love the sweater. I messaged someone on Ravelry with the same yarn in her stash to see if she had the same dye lot. She hasn’t responded yet. I’m giving it a week and then I’m going to give up and order more yarn. It is not likely to match exactly, but I’m hoping if I use it for the sleeves it won’t be noticeable. If you have ever used yarn of different dye lots in a project like that please let me know how it worked out. I could do a contrasting gray bit at the bottom, but I’m loving the green and purple so much I don’t want to change the look unless using a different dye lot would be disastrous.

John’s socks are also moving along slowly. I’m almost done with the gusset on the first sock. I have a reason for not making much progress on these – I’m in Cedar Falls for three days this week and then camping all weekend so I wanted to knit ahead on my daily squares. That meant most of my mindless knitting this week was spent working on the blanket.

I’m now off to get some knitting done while the kids nap. Wish me luck!

I am solidly in love with the Caramel sweater. 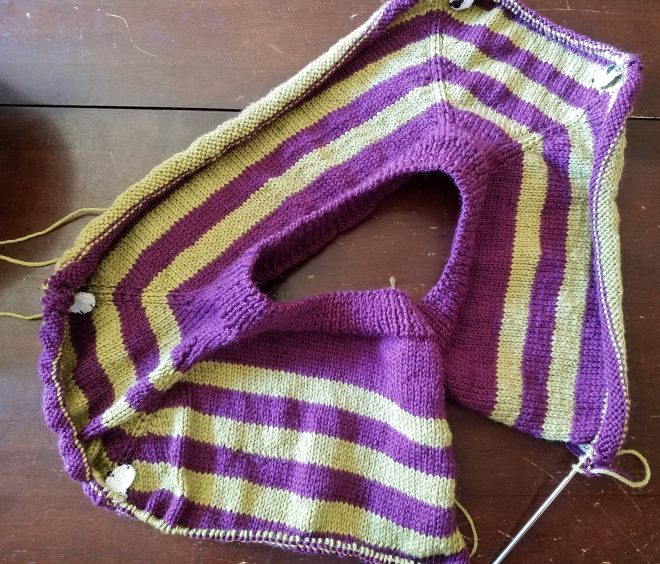 I’m growing more concerned that I will run out of yarn. I might check on Ravelry to see if anyone has some of the same dye lot that they are willing to sell.

I bought a 60 inch cord for my interchangeable needles so I didn’t have to bother with linking two shorter cords together. I always find the join of the needles fiddly and I suspect it slows me down. It should be easier now that I have new cord.

Earlier when I picked up the sweater to work on it I realized that about 20 stitches had slipped off the needles. I’ve never had that problem before, but it has happened several times with this project. I’m not sure if the sweater is cursed (it probably is) or if I should be more careful when putting the sweater away.

My plans for tonight are to do nothing but work on this sweater. I really hope that happens.

It was a busy week. On Sunday we went to the park. John pulled the kids in the bike trailer and I ran to meet them. It was really hot, so I sat on a bench trying to stop sweating and ended up talking to another mom watching her kid play. I don’t normally have a conversation with people at the park, other than polite chit-chat. On Sunday I talked to the other Mom about parks. She suggested some of her favorites around Des Moines. I made a list and hope to try them all. I wonder if this means I should start being more social at parks.

On Monday I decided to try the park most recommended by Sunday Park Lady. That park, Quail Cove Park, is in West Des Moines. There were two playground areas and a half mile trail. We checked it all out. One of the playgrounds is for bigger kids, which didn’t stop Audrey from climbing to the top and terrifying me. 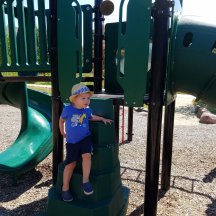 I really liked the park. As an added bonus, it pretty close to John’s office. It will be a convenient way to wear the kids out before a trip to Trader Joe’s, Costco, or lunch with John. It also has flush toilets, which is something I really look for in a park.

On Tuesday we went to the grocery store and played outside in our yard. It was a pretty low-key day for us.

On Wednesday we went to story time at the Des Moines Public Library. They had a craft for the kids, they made tool boxes and colored tools. The craft was a huge hit with both kids. They played with their paper saws and hammers all day. When I saw the craft I did not expect them to play with it all day. Elliot ran away from me while I was checking out DVDs. Luckily I could see where he was going and I found him jumping off of benches and playing with puppets. 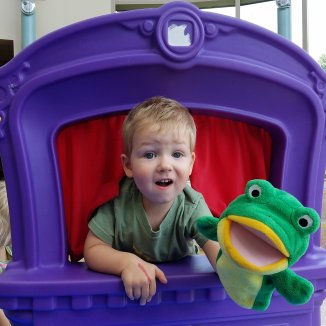 On Thursday we headed to the wading pool at the park closest to our house. It was a little chilly, but that didn’t stop the kids from playing in the water for an hour. We stopped by the playground on the way home, where Elliot showed me his terrifying new-found climbing skills. 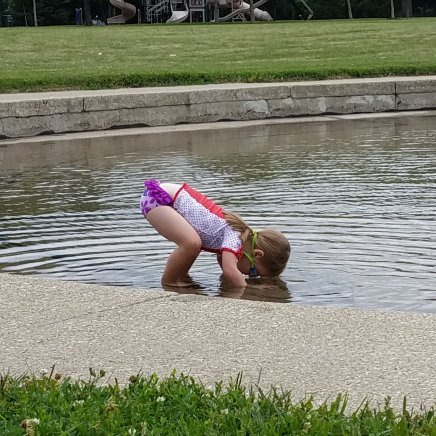 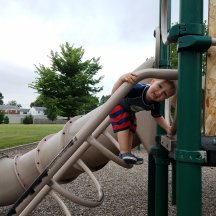 Thursday afternoon we had about 15 minutes free between errands and dinner. We drove right past another park Sunday park lady recommended, North Karen Acres. We stopped to check it out. Audrey saw the pirate ship and yelled “THE RUSTY HEAP” a sign that we read a lot of Ned The Knitting Pirate (his ship is named the Rusty Heap). The kids had a really great time playing at that park. Elliot threw his biggest fit ever when it was time to leave. We will be back to visit. It is right by the Aldi we go to, so there might be some Aldi/park time in our future. 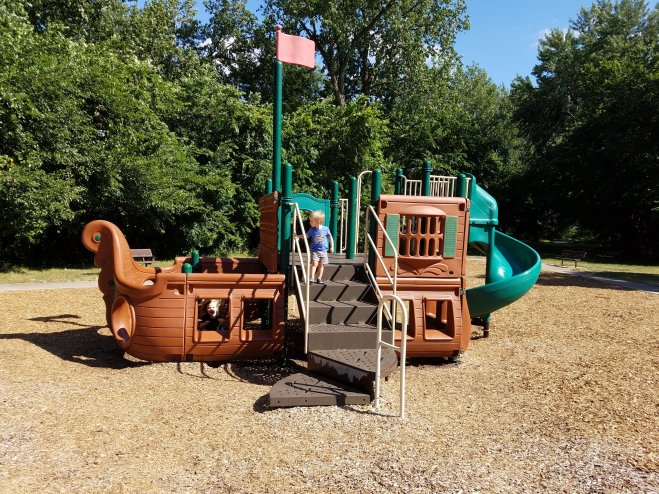 Today we played at a friend’s house. He has two little boys. The kids played well together for about an hour and a half. I was actually able to sit and have a conversation with my friend. I love it when that happens. 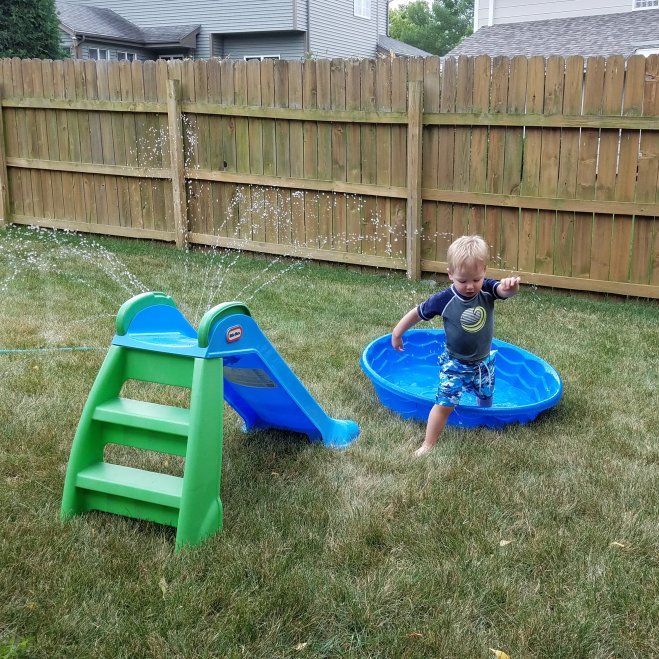 We don’t have anything planned for tomorrow. I hope we get out to a park. Maybe we’ll even fill up the pool in our backyard and watch the kids play from the comfort of the patio.

I hope you had a fun week! Do you have any parks in the Des Moines metro you would recommend?