On Tuesday the kids spent the day with their grandparents. John’s parents are in town and are wonderfully active in the kids lives. It was nice to have the day alone to run errands.

There is one downside to kids spending the day with the grandparents – the rebound day. The kids are jerks for a day while they return to their normal routine. Normally that isn’t an issue, we get to the Y in the morning to play and head to the library or run errands after nap.  If I keep them busy they don’t have time to whine. That wasn’t an option yesterday, when it was so cold it wasn’t safe to leave the house.

I knew when I dropped the kids off at John’s parents that I was going to be stuck inside with the kids for at least the next day. I decided desperate times call for desperate measures and headed to the best used kids clothing shop in town. I wasn’t there for clothing (although I picked up plenty of that while I was there too), I was there for the toys.

The kids both love playing with trains, and I figured I could find a few things to keep them busy and happy.

I picked up two Chuggington DVDs. To be honest, Elliot likes Thomas more than Chuggington, but I find Chuggington much more entertaining, so that is what I grabbed. For $7.50 I knew an hour of our afternoon would be spent quietly watching Wilson, Brewster, and Koko.

I bought a bag labelled “wooden trucks” for $3 because it looked like there were trains and steamrollers in the bag.  I was thrilled when I took them all out and realized how many great things were in the bag. Two fire trucks that work on train tracks? A coal car? This bag was a find! 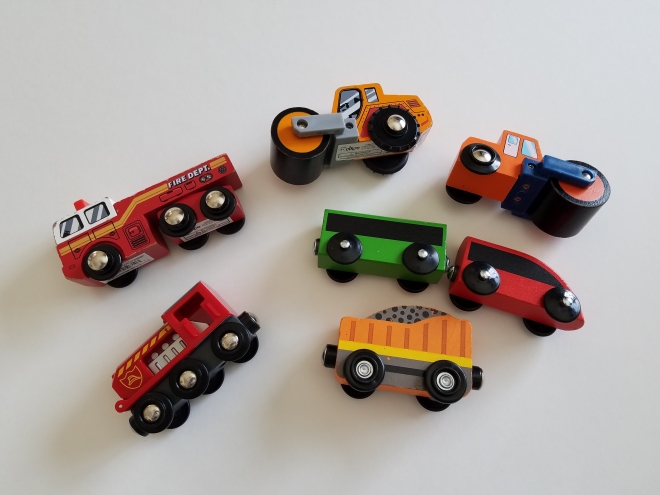 I splurged and bought a $9 train set because it looked like the tracks were compatible with ours, and John and I had just talked about how more tracks would be a good idea.

On Tuesday, when tucking Audrey in, she asked what we were doing the next day. I told her we would be stuck at home because of the weather, but I had a few presents to make the day special. I meant to say surprises. I know that telling a four-year-old about presents at bed time is a pretty silly thing to do. She I should wrap the presents. I told her I probably wasn’t going to wrap the surprises. She said I should wrap the presents in Mickey paper. We have Mickey paper in the basement. Little kids take a long time to unwrap presents. I decided I could fill more of the day if I wrapped everything up.

Before John went to work I had him give him the kids the train tracks. I didn’t want to get all of the credit for the amazing present filled day.

The kids played with the train while I made breakfast. We had a special Polar Vortex breakfast of cinnamon rolls. I really threw all of my rules about healthy eating out the window yesterday. I’m glad I did.

After breakfast I let them each open one present an hour until they were gone. Because of naps, that worked out to be a present every hour they were awake until dinner. They were really happy. 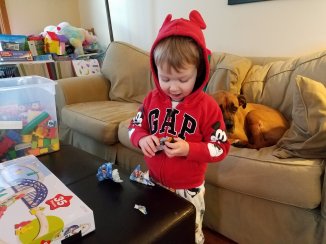 There were a few hours there where I really questioned the present every hour thing. My kids are too young to really understand the concept of time, so they were constantly asking when they would get another present. It was still worth it, because Audrey kept saying it was like Christmas or her birthday. She was so happy.

They spent the day playing with trains. 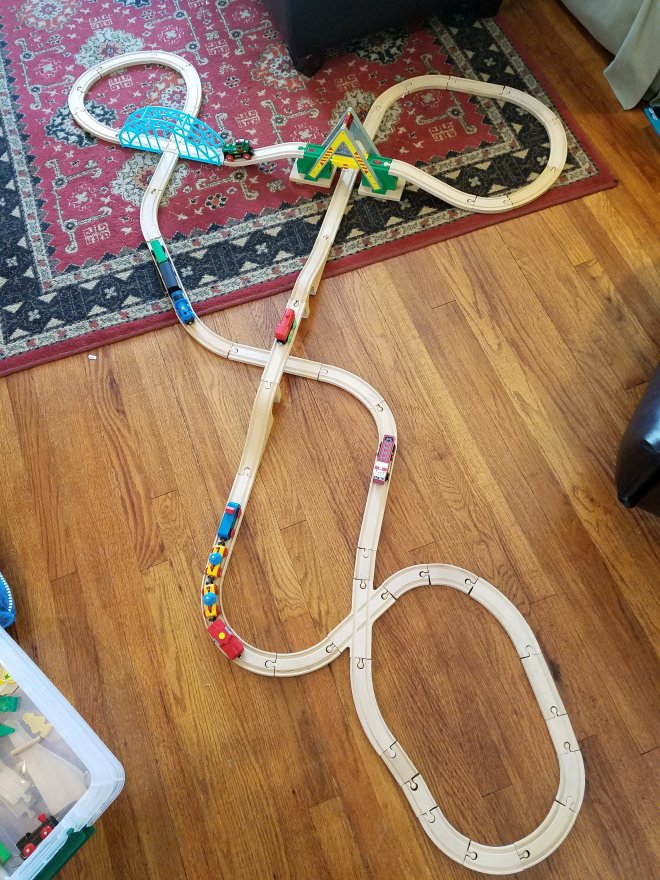 And the afternoon we watched a new Chuggington. The whole time Elliot was never far from the red train from the new train set. He is convinced it is James from Thomas.

Audrey does not think it is James, and told me that the red train doesn’t have a face, so it isn’t really James. I said I agreed with her and she said in a disgusted tone “Why did you even think it was from Sodor?” So the day was great, and I found out my daughter thinks I’m an idiot for not knowing that a plain red train is not from the Island of Sodor, home of Thomas the Tank Engine. 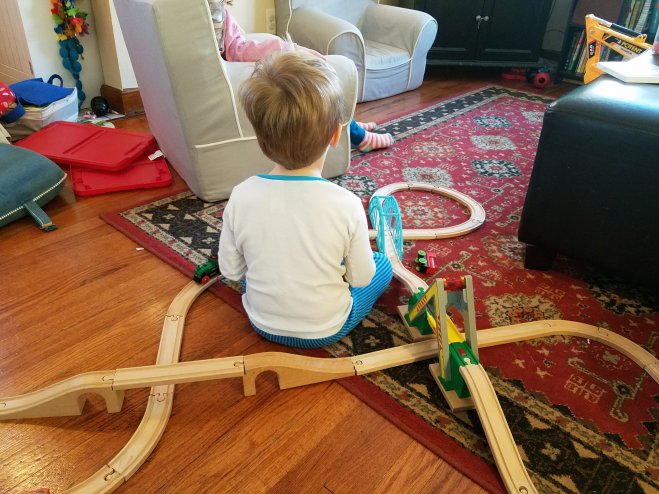 I will do this again, ideally when they have a better understanding of time, but before they understand that I just spent $20 buying used toys to wrap up to make our day better.

We were stuck at home today, but the trains kept us busy. Tomorrow it will be a balmy 23 degrees. That sounds much better than the -24 we had yesterday.