I got a lot of knitting done this week.

I made a hat for John. Our anniversary was last week. The traditional gift for 7 years is wool, so I picked up some yarn in colors I thought he would like. He picked out the pattern (Little Boxes Beanie by Benjamin Matthews). This was a fun, fast knit. I’m going to make Elliot and Audrey hats that match John (if I ever get around to it).

I finished my sweater.

Twice, actually, because after blocking the sleeves grew about six inches. I fixed that. 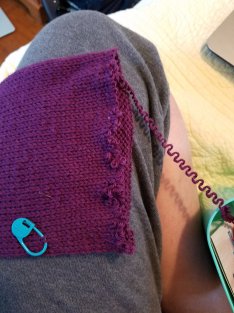 And now I am never going to take it off.

I cast on a Zadie sweater as soon as I finished the caramel sweater. If I’m going to meet my goal of knitting it before Thanksgiving I’m going to have to knit a skein a week. It will be an easy project to travel with, as it is all stockinette. It is, however, incredibly boring to knit, so having the deadline is probably a good thing. Without the knitalong this would end up in a project bag for months. 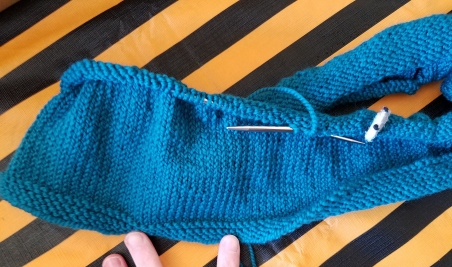 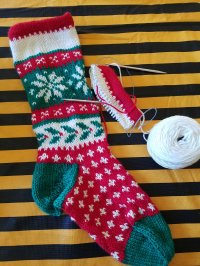 I finished the first stocking and cast on the second one. I will duplicate stitch the names and years on to the stockings when they are both done. I hope to have these both done in a couple of weeks.

Once I’m done with the stockings and sweater I’ll pick up the socks again. Until then they will sit in their project bag.

I hope you had a productive week too!