As I mentioned yesterday, camping wore me out. Part of that is the lack of sleep. The other part is we spent the entire time on the go. It was such an enjoyable weekend.

The drive down to North East Missouri (in the same area as Mark Twain State Park) took about 4 hours. It went remarkably well. I borrowed my sister’s portable DVD player, so the kids were able to watch Mickey Mouse and Olivia in the car. We stopped at a park about three hours into the drive. Getting them out of the car to play helped all of our moods. 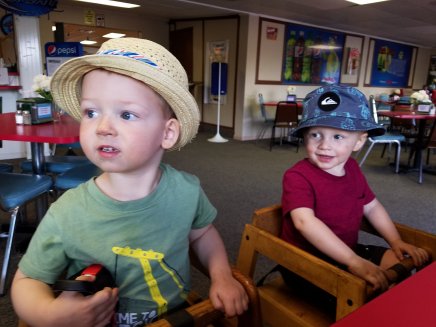 This is the first time the boys have spent much time together. They immediately hit it off and played well together all weekend. It was so much fun to watch.

After dinner we headed back to the camper. The girls and Bryan went for a ride on the golf cart (Kirsten’s husband was there dropping it off and drove them around) while Kirsten and I go the beds ready. Elliot was not up for a ride yet. He liked exploring the golf cart, but he was scared of riding on it. 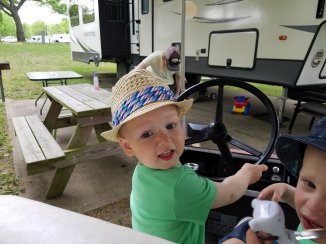 After the golf cart ride we tried to get the kids to bed. It did not go well. That was the case all weekend. As they get older it will get better. That’s what I’m telling myself.

In the morning we had breakfast at the camper before we loaded up the golf cart and heading out to play.

The first stop is the modern playground. It is a big cube for climbing, with a slide and swing in it. The kids loved exploring it. Eventually it got busy and we headed to a different playground. 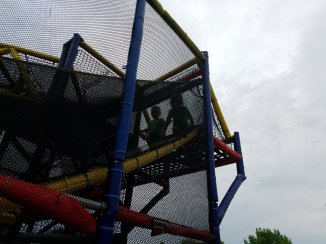 The second stop was an older playground, also at the campground. We were the only people there, which the kids (and their mothers) enjoyed. The kids played hard until it started to rain.

The campground has a place for kids 1-5 that is basically an indoor area to explore. Sadly most of the toys were broken and it hadn’t been cleaned for what looked like a decade. That being said, it was free and kept the kids busy.

After all of that it was only 11. We decided to have lunch and try for naps. Lunch went well. Naps didn’t. The boys got out of their pack and plays after about 30 minutes and walked out to the living room. We decided to throw in the towel and explore some more.

We headed to the Mark Twain Lake visitors center. It was full of things to do. We checked out a few scenic overlooks. We took a hike. We looked around the visitors center. They had a table with crayons and coloring books for the kids. The employee on duty even handed me a bag with 4 packs of sidewalk chalk and two workbooks for the older girls. He mentioned they will be added a playground next year, so we will be back.

The nice guy at the visitors center then told us the best park to visit at the state park. It was a great park and it is very close to the campsite. There is also a beach close to the park, so hopefully we will try that out later this summer. The kids were so entertained at this park Kirsten and I were able to sit on a bench and actually talk! It was a miracle.

That night getting the kids to sleep was horrible. At one point I went in to check on the boys because they were being very loud. They had crawled into bed together and were very proud of themselves. 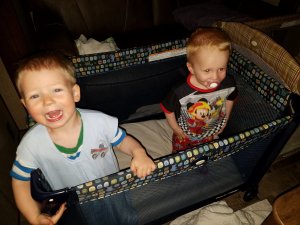 On Sunday we got up, attempted to go get pancakes and found the restaurant closed, and drove home. All in all, it was a crazy way to spend Mother’s Day weekend, but it sure was fun.