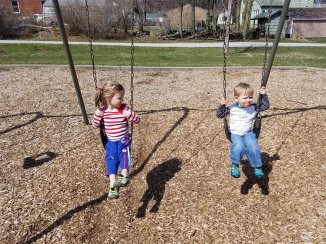 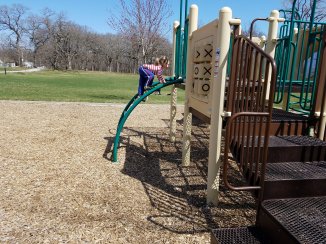 It was a beautiful day in Des Moines today. It was in the low sixties by 10. That meant a walk to the park was in order.

We have three parks that we like to play at within a twenty-minute walk from our house. There is also a fourth park (the closest to our house, actually), but it doesn’t have much for little kids to play on. Today I let Audrey pick the park. She chose Beaverdale Park. I was pleased with that choice – it is a nice 20 minute walk for us and there are lots of hills on the walk to make me feel like I’m actually getting a workout in.

Today I was struck by how big the kids are getting. Audrey is now climbing on the equipment she was scared of last year. She now prefers big kid swings to toddler swings, even though I barely push her when she is on a big kid swing. She didn’t swing in a toddler swing at the park at all (nor did she in our yard this afternoon).

Her new obsession with big girl swings appeared to be wearing off on Elliot, as he asked to go in a big kid swing too. I am happy to report that he only lasted about 30 seconds before wanting to go in the toddler swing. Occasionally realizes he that he is not three.

It feels like spring might actually be here. The forecast for the next week looks beautiful, so we will hopefully be outside a lot. I need to dig out the sunscreen and summer clothes. I could probably put the winter stuff away, but after the spring we’ve had I’m not quite ready to do that. I’m worried I would jinx the weather and we would have snow again.

Am I the only one that is going to cry if it snows again this spring?